In Switzerland thousands of people are held in immigration detention. Affected people have to stay in prison up to 18 months. In comparison to usual prison the immigration detention is not based on a crime, but just on the suspicion, that someone wants to elude his/her deportation. The migration office can‘t just impose the imprisonment on a person, but has to verify it by the court for compulsory measures (Zwangsmassnahmengericht), which is the idea of a democratic division of powers. But in practice the court almost always confirms the requests of the migration office, which always has to renew the order of imprisonment after three months. An analysis of processes shows, how the courts and the court practice legitimate the degrading and psychically devastating immigration detention in democratic und juridical terms.

Justifications for the immigration detention

The law is put in a way, that the court has an enormous discretionary power to justify the suspicion, that a person will elude his/her deportation:

«Even though an accused person has the right to a free attorney, this is rarely ever provided. Most of the hearings are held without any advocate.»

Demands for the Migrations Office

Also the Migration Office has to fulfill some requirements, to make the detention permissible. But the tribunal also has a big discretionary power to acknowledge the adherence to this requirements: 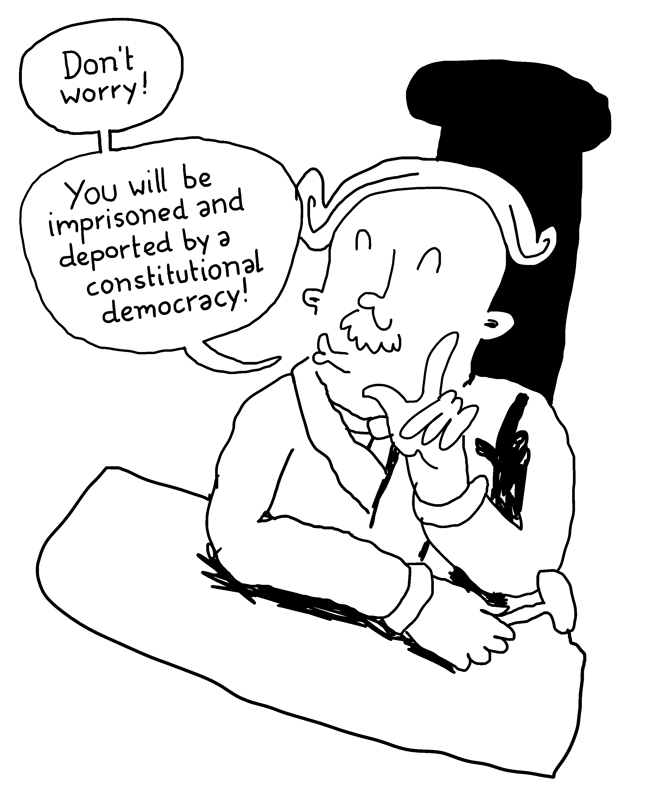 The first thing in the court hearing is the questioning of the accused person. The judge asks questions in order to get statements that justify the suspicion of going underground. E.g. if a person would like to stay in Switzerland. A harmless, „yes, I like it here“ can reach for three months of prison.
If the detained person doesen‘t speak german, the hearing will be translated. But the translation is oftenly not made to the mother language of the person, but in any language that the person is supposed to understand. If an arabic speaking person understands some french, the hearing can be translated to french. The authorities don‘t care, if the person has no chance to understand the juridical wording and the text of the law in this language.
Even though an accused person has the right to a free attorney, this is rarely ever provided. Most of the hearings are held whitout any advocate. For Basel there is one single advocate who is responsible for everyone who is in immigration detention.

That is how a complex apparatus of juridic and democratic instruments is put to work, to legitimate the imprisonment and violent deportation of thousands of people. The Swiss State affords these prisons, tribunals and processes to justify this xenophobic practice in a pseudo-democratic framework. The multilayer bureaucracy takes the responsability of single persons und transmits it to institutions, so any person involved in the system, can deny any responsability for human tragedies.

The immigration detention also serves to demoralise people. In many countries the Swiss authorities can‘t deportate people by force, that‘s why people have to stay for months behind bars, until their morale is so low, that they prefere to leave „voluntarily“ to their homelands, instead of staying any longer in Swiss prisons without knowing why. Often one can hear the sentence, „here in Switzerland it is even worse, than in my country.“ This the exact goal of the authorities. To establish this tactics of demoralisation and the imprisonment of undesirables in a so called society of western values, the above described juridic-democratic play is needed.
For the imprisoned it must feel like in a novel by Kafka. They are being imprisoned for months without understanding what for, by a huge bureaucratic complex, in which everyone fulfills his/her function as a matter of course. Interrogated and listened to, but no matter what one says, at the end there are three months of imprisonment, whitout knowing what for – and without any possibility to avert the inevitable prolongation of the detention.

Altough not affected himself, the writing person got to know the deportation bureaucracy in direct contact as well as from the experiences of affected people. Because of these experiences, he doesen‘t think, that it‘s worth to fight deportation on juridical level, because the deportation machinery and the border regime must be brought to an end in their entirety. This includes the laws that legitimise them.